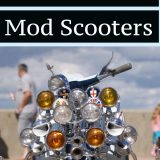 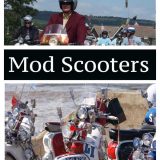 Mod scooters are still extremely popular some 50 years on from their heyday in the 1960s.  For some admirers they never went out of fashion, but the mod revival in 1979, fuelled by the release of Quadrophenia, brought them to the attention of a new generation.

The best mod scooters are vintage Lambrettas and Vespas, covered in accessories including lights, mirrors, badges, chrome and whip aerials.  Add a sprinkle of chrome and you have the perfect posing machine.  Goodness knows what they’re like to ride though, with all that weight on the front, and they are as wide as a small car!

Rally Guides
If you’re planning your scootering calendar for 2021 then check out my 2021 Rally Guide to get the best choice of accommodation.

For an in-depth guide to the biggest scooter rally in the world, here is a link to my Isle of Wight rally guide.

Here are some of the mod scooters I’ve photographed over recent years.  Some of the best are from the Isle of Wight scooter rally in Ryde, as they seem to be extra shiny in the sun.  Ryde still attracts many mods over the August bank holiday despite the alternative rally held in Brighton.  The great thing about the scooter scene is the variety of tastes on show, and I don’t think there’s a more eclectic subculture in the world!

This image received a lot of attention after I posted it.  It’s one of the most extreme mod scooters I’ve ever seen, covered in so many lights an mirrors.  The photo was taken on the green at Ryde at the Isle of Wight scooter rally.

This is Nita’s custom Lambretta Mr Whippy which has won many trophies over the years.  It even features a horn which plays an ice-cream van tune!

This Quadrophenia-inspired reproduction of Sting’s Ace Face scooter is owned by Neil from Coventry.

You need plenty of polish to keep all the chrome clean!

Buy all your scooter gifts here, many of which are supporting scooterist businesses 😊

Diary Of A Detour is an online magazine which features scooters, travel, street art and lifestyle articles.

Use the menu at the top to seek out the various topics and read about what interests you. Thanks for visiting!