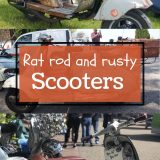 I have a confession to make; rusty rat rod scooters are a guilty pleasure of mine.  While most of the photos on my website are shiny beauties with chrome, engraving and awesome paintwork, it takes a different skill to produce an aged, rusty machine.  They have just as much thought and skill as the top custom bikes, with amazing engineering and clever, quirky accessories.

Now I hope I’m not doing a disservice to any of the scooters featured below by including them in this collection of rusty rat rod scooters.  Some may just have tired paintwork and a few stickers, so their owners may not feel like they belong here. But I wanted to celebrate all the scooters which don’t make it into the glossy mags, the ones that are ridden hard and haven’t seen any T-Cut recently, and those which have seen better days.

I’m going to start with a fantastic example of a scooter which is unique, quirky, and has far more thought and originality than most scooters.  I could write a whole blog about Snowy White’s scooter.  Every time I see his Vespa it has a new paintjob, accessory or stencil.  Here is a brief history just from the past couple of years, but it’s evolving all the time and will have gone through another couple of makeovers by the time this blog is published!

Here it is at the Isle of Wight in 2016, just for context to show how many times it has changed since.

And here’s a photo by Snowy himself with a great side view.  That seat looks SO uncomfortable!

So the transformations begin…  Here it is on another rally but with a different headset and some kind of voodoo doll in the headlight grill.

Just one year later and it looks like a different scooter at the Isle of Wight rally in 2017.  It had been overhauled into Ride of Frankenstein, with a different seat, wooden box, various cans and bottles attached and a front headlight in the standard position.  It’s had the full rusty treatment and looks pretty good!

But then, over the winter, Snowy reinvented it once again.  The new model was first unveiled at Bognorphenia.  It has a distressed red paint job, the headlight is back in a lower position, there are new panels and a fuel tank on the front legshields.

And next, just a month later at the Bulldog run, it has murals and it has been christened Cropduster!  The number 54 is in memory of an old schoolfriend, Mark “Mad Dog” Mellor who was responsible for christening Snowy with his nickname.  They met on the first day of big school and 54 was his scrambler race number and became their lucky number from then on.  The day Mark died, Snowy rattle canned the number on his scooter, and that was also the day of the first ever Hoodlums SC rideout.

And finally, at Hayling Island, a rat has been added to the front mudguard!  I know that it has changed since too, with barbed wire added for an HT lead!

This Lambretta was at the Solent Cougars rally and the owner hails from Heathrow.  It has a Gilera engine and has a few nice features including drop handlebars and a lovely curly exhaust!

The next example is owned by John Hibbert from Nottingham.  These are his photos of Cheap ‘n’ Nasty, a PX with Harley bars, Harley footplates, a peanut tank, Bobber tractor seat, fat back wheel and a 166 engine.  It was painted with a rust solution called rustique which comes in two parts, the first being a paint which has small metal filings which go rusty when you add the second part, a salty water solution.  The rusting is ongoing until it’s lacquered.  It’s a great example of pulling different parts together to make something totally unique, which is what I love about scooters.  They are so customisable, and can be personalised in so many ways!

Here are some photos of a rusty Lambretta LD, possibly owned by Lobby or one of his clubmates in Company C.

This is a Bettie Page themed Vespa rat, owned by Chris Abrams.  He built it himself with a bit of help on the engine which is a flowed and ported Malossi 166 with reed value.  It was built from bits and pieces and has been set up for fast touring.

The next example is a beauty from Sean Robinson, of Garagistas fame.  Sean has built many incredible scooters, welding everything he comes across into new, mutant machines.   These are his photos of one of his projects, a Vespa rat which is another of his creations which includes upcycled parts from various different places.  Sean actually inspired Snowy to think outside the box, when he and his mates chopped and matt-blacked their scooters after Mad Max came out in the early 80s.  He really does take the idea of ‘customising’ to the next level.

Here are some typical rusty Lambrettas, from the Hayling Island rally (read more about it here!), starting with one called Crack Whore!

I do love the signwritten versions too, like these examples from Hayling.

And there you have it – the collection of rusty rat rod scooters that I’ve curated over the years.  Are you a fan, or do you prefer a more traditional restoration, or a pristine, muralled full-blown custom version?  I’d love to read your comments below!

If you want to see more gorgeous scooters or top scooter tips then you may also enjoy these :

I have loads of other scooter content which you can access via the menu at the top!

This post contains affiliate links. If you click on a link, I get some money at no extra cost to you = I get to write about more stuff I love, yay!

Diary Of A Detour is an online magazine which features scooters, travel, street art and lifestyle articles.

Use the menu at the top to seek out the various topics and read about what interests you. Thanks for visiting!